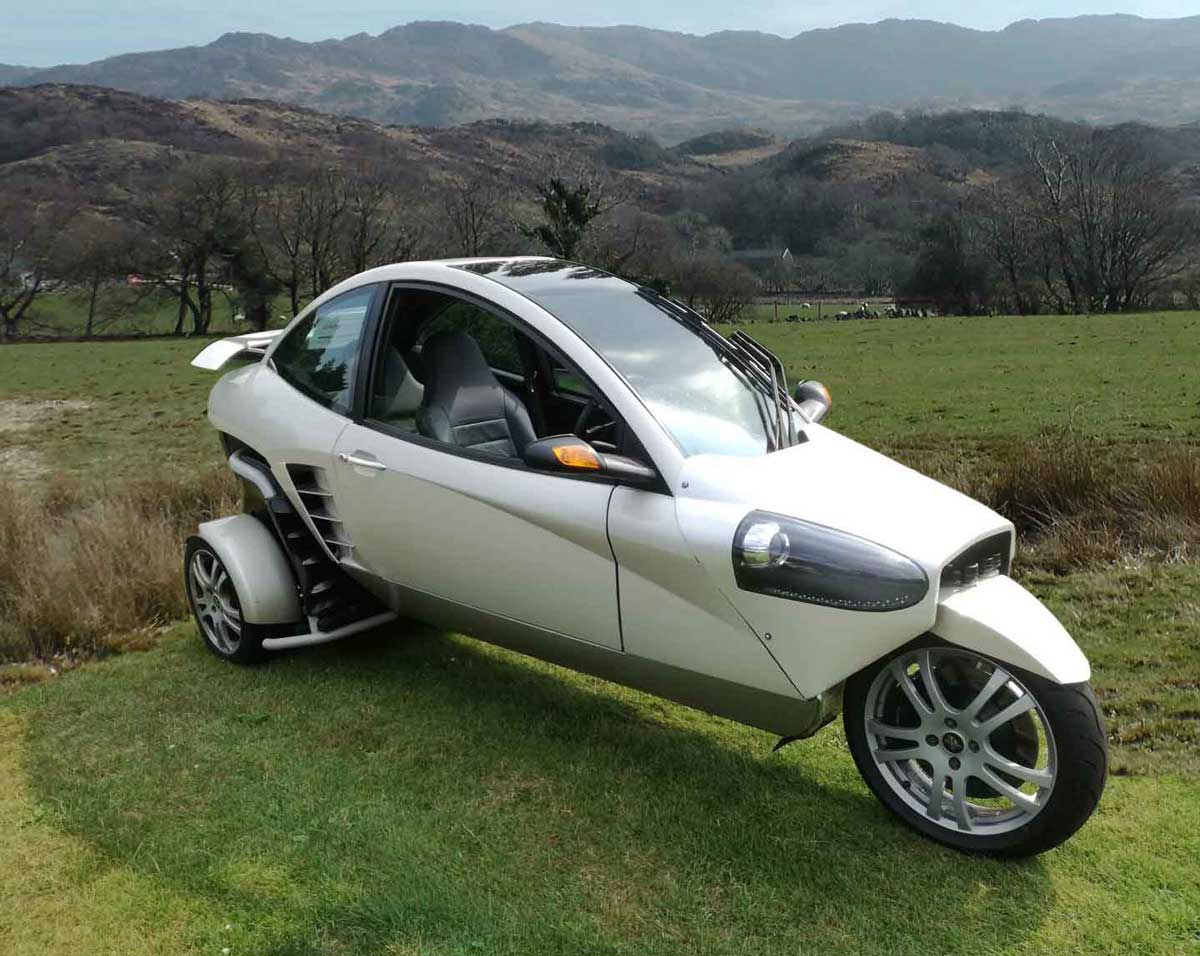 Is it a car? Or a motorbike? Neither? Or both?

The Carver One is possibly the weirdest, or most imaginative (depending on your point of view) vehicle of the century.

Back in 1990 a gentleman named Ton van den Brink was getting fed up of driving around Paris in heavy traffic. All these cars that were big enough to seat four or five passengers almost invariably had either a driver only, or a driver plus one passenger aboard and he concluded that there would be a good market for a vehicle which was just about wide enough to seat one person but which was comfortable and weatherproof.

Unfortunately however a narrow car is unstable. Get a heavy crosswind or try to turn a corner too fast and it is likely to topple over. However this isn't a problem with a motorcycle because it can lean into a corner. A car cannot do that of course; if the outer wheels leave the ground the whole vehicle is completely unstable. The answer? Design a vehicle which will tilt, whilst the wheels stay firmly on the ground. The three wheeler Carver One was the result.

This was a long and narrow vehicle with one wheel at the front and wto at the back, and two seats, one behind the other. It was so narrow that a passenger almost invariably had to sit with legs astride, one on each side of the front seat. The driver sat in what felt like the cockpit of a fighter aircraft with a windscreen which extended up and over to about the centre of the vehicle giving excellent visibility.

The engine was a 600 cc straight four cylinder unit with a turbo which produced around 65 brake horsepower; performance was very nippy with nought to 60 mph within about eight seconds and a top speed of around 115mph. An optional engine upgrade could provide a top speed in excess of 140 mph. It would have taken a very brave or highly experienced driver to use the performance to the full.

The fact was that this was a very strange car – if it can be called a car – to drive. It incorporated a technology called Dynamic Vehicle Control; this tilted the car body, whilst the wheels remained completely vertical! Just turning the steering wheel made the car tilt which created a very unusual sensation for the novice driver. It had a large turning circle and going round a roundabout meant that the steering wheel had to be turned to, often, full lock which cause the body to tilt at 45 degrees and even at low speed any manoeuvering also caused a degree of tilt. For many drivers this created an unusual experience to say the least.

On the plus side it was reasonably manoeuvrable; nowhere near as nippy as a motorbike though, since the wide turning circle was a big drawback. It was much easier than a car to park and relatively inexpensive to run, particularly since, in many countries, it was taxed as a motorcycle. However it was not cheap. Retailing at around £30,000 it cost about the same as a full-sized sports car and many potential buyers were put off by the unusual way that it tilted – or as some said, wobbled - along the road.

What didn't help was that the Daihatsu engines that were fitted in the vehicle became unavailable after Daihatsu's owner, Toyota, decided to no longer sell them to third-party manufacturers. After around 200 Carver Ones were sold the company manufacturing it went bankrupt.

The right to the technology however vested with the original owners of the company who decided to license it to other vehicle manufacturers but to date, volume manufacture hasn't happened. I wonder why.